In a community as young as Glenmary (founded in 1939), there are many who still remember the founder. In 2003, all the priests and brothers who entered before Father Bishop’s death, June 11, 1953, were asked to share a memory, a quote, a story. A selection follows.

A simple man with a single focus 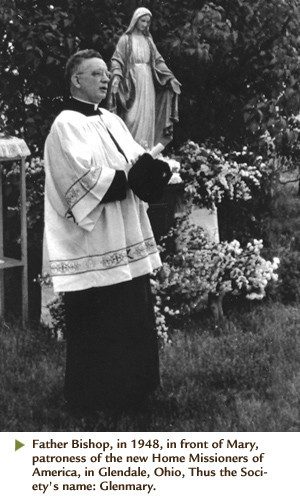 Father Bishop [born 1885] was raised in what we might call an upper middle-class family in Washington, D.C. His father was a doctor. He spent two years at Harvard before going to the diocesan seminary in Baltimore, and his chalice at ordination was a gift from a justice of the U.S. Supreme Court.

Yet none of this was evidenced in his lifestyle. His room was the same as the rest of ours. His attire was simple black. We all had the same allowance. He encouraged us to live simply, and he led by example.

And he was focused—always true to his principles. Here is one example of that focus. One of our early missioners was lost to Glenmary because of a disagreement with Father Bishop over starting a school in a new mission in South Carolina. Father Bishop was not opposed to Catholic rural schools in principle. But schools required a great amount of time and money to build and maintain. They benefited but a small number of the children in the large territories which we served. The great effort detracted from our purpose of making new converts to the faith.

But that missioner could not be dissuaded, and Father Bishop would not be diverted from what he set out to do: launch a Society focused on the conversion of the least. The defiant missioner parted ways with Glenmary.
Father Jim Kelly

I heard about Glenmary while still in high school. Being a Cincinnati boy, I looked up the number and called. Father Bishop answered the phone—not a secretary! I said I wanted to talk about Glenmary. He said, “Why don’t you come out on Easter Monday?”

When I came for that appointment in the spring of 1944, we talked less than 45 minutes, and I signed up. He said he would take care of everything. I told my mom, who was waiting in the car, “I’ve found what I am looking for.” The date was 4/4/44.

Nine years later in May 1953, Father Bishop was proudly present as our class became the only one to be ordained at Glenmary with Father Bishop present. Before then, Glenmary men were just added to the ordination class at Cincinnati’s cathedral. But in 1953 Cincinnati Archbishop Karl J. Alter said he would come to Our Lady of the Fields Seminary Chapel for our first ordination there.

We were Roland Hautz, Frank Korzinek, Bernie Quinn and Ray Orlett. After it was over, I remember Father Bishop reflecting on the wonderful day and saying, “We now have men ordained in our own chapel. I feel as though we have finally arrived.”

When I was a novice, Father Bishop came to interview all 25 of us. When he asked me how things were going, I told him I could not read with my left eye. Since that was what the Church named as the “canonical eye” to read the Gospel at Mass, I had doubts about going on. He told me to see a priest in my hometown, who was presumably a canon lawyer.

Then, as he led me out of the room, he dropped his handkerchief on my left side, and I picked it up and handed it to him. Later I realized this was a foxy move on his part to test my vision. Nothing more was ever said about my eye. I was ordained in 1955.
Father Bob Rademacher

The importance of the laity

It was a hot Sunday in early June 1953. Father Bishop had spent the previous night in Hunter’s Valley, Va. He was scheduled to speak that afternoon at the little log chapel in Dungannon to Legion of Mary members from Glenmary missions in Norton, Appalachia, Big Stone Gap, Gate City and St. Paul.

Father Bishop commended these lay people for their apostolic work of visiting the sick, the elderly, non-Catholics and fallen-away Catholics in this coal-mining area of Southwest Virginia. He emphasized that missionary priests, brothers and sisters could not possibly do all this. They needed the hands, hearts, talents and personal contacts of these lay men and women to build up the Church in all the mission areas.

Later that week he had a heart attack and died at St. Mary’s Hospital in Norton.

In light of Vatican II’s later emphasis on evangelization and the role of the laity, I find it interesting that Father Bishop’s last public address, in a backwoods area of the Appalachian Mountains, was on this very topic.
Father Leo Schloemer

Promoting the home mission cause

Father Bishop was a handsome, serious man with a warm smile, a handshake to remember, and a will of iron. My first impressions were gleaned during a trip made with him to look over some missionary territory in central Tennessee. He enjoyed stopping for a cold drink or a cup of coffee. But his driving was not as good as his character or his administration.

Early in the game, Father Bishop saw the need to make friends to support Glenmary’s work. His very attractive personality and skill with a pen made this easy for him.

Before long Father Bishop spent all of his time in correspondence with potential candidates, in money-raising and publicity activities. When Father Raphael Sourd arrived on the scene, it was like Father Bishop had acquired a second right hand.
Father Pat O’Donnell

Focus: On the most neglected

I clearly remember a visit with him to Manchester, Ohio, in the late 1940s. This was Glenmary’s very first mission.

As we drove into town, Father Bishop commented, “We made a mistake here. Instead of locating the church among the middle- and upper-class folks on Eighth St., we should have been down on the riverfront with the struggling people.”

His captivation with working in the most neglected areas was again apparent to me on a visit with him to New York City. The only interest he expressed was to visit the Catholic Worker and Dorothy Day. When we arrived, it was obvious that Dorothy knew him well and that she had a deep admiration for him, as he did for her.
Father Bill Smith

Father Bishop asked me to drive him on a mission visitation in June 1953. We left June 2 and visited the Ohio missions in West Union and Otway. We arrived in Norton, Va., the evening of Friday, June 5. On Saturday we spent the night at our mission chapel in Hunter’s Valley, built by Father Bob Berson. I believe of all the missions we visited, this chapel was Father Bishop’s pride and joy.

On Tuesday we had the first hint that something might be wrong. He experienced a pain in his chest and the doctor admitted him to the hospital in Norton to check things out. It seemed that he only needed to rest several days. But after a bad night with severe chest pains, Father Joe O’Donnell anointed Father Bishop early Thursday morning.

When some of the pain subsided, Father Bishop turned to Father Joe and said distinctly: “Tell Father Sourd that I leave everything in his hands with complete confidence. I’m glad I finished my visitation. We have a good company. I’m not concerned about anything now.” He died the next day.
Brother Bob Hoffman