Home / News and Notes / Moving to a new mission

Moving to a new mission 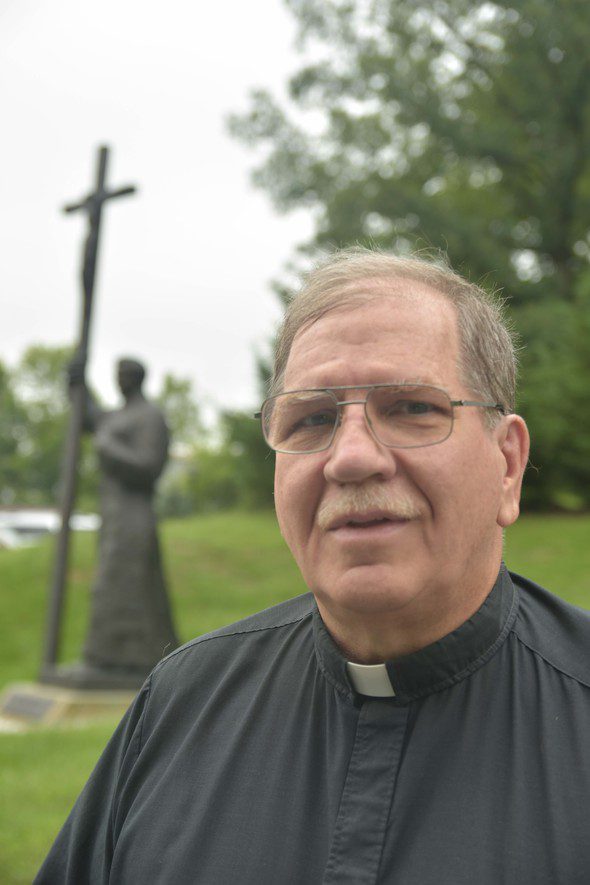 What is a missioner? We asked that question to Glenmary Father John Brown recently. He left his parish in Blakely, Georgia, not too long ago, and has been assigned to serve a new Glenmary mission, Holy Trinity parish, in eastern North Carolina.

No easy life, the missioner’s. Father John remembers when he was in college, back in Worcester, Mass., not far from his Cambridge home, dreaming of becoming a doctor, with a nice family, thinking about what kind of house or cars he might own. (The house of his dreams was an old two-story, with a wrap-around porch, topped with an imposing turret.)

“I was at Sunday Mass one day, and I heard something within, clear as can be, as the priest was lifting the host, saying, ‘You should be doing this. There are people all over the world who don’t have the sacraments, who don’t have the presence of the Church.’” John left church that day with a new sense of his life’s direction, and would eventually end up at Glenmary. Now, that’s a calling!

But calling happens again and again for the missioner, just as it does for each of us. Father John is now serving Martin County, North Carolina to follow his calling yet again. There he’ll find people, in his words, “Who don’t have the sacraments, who don’t have the gathering, who don’t have the fullness of the Church, who are struggling because they live in a place where more than 90 percent of the people don’t understand the faith. The kids are the only Catholics in the school, the parents are the only Catholic at work. People have doubts about the Catholic faith.”
In this area, northeastern North Carolina, once home to slave plantations, then textile mills, about 21 percent of people live in poverty.

Holy Trinity, in the Diocese of Raleigh, has been around for many years, but in recent years the community has depended upon a visiting priest for Sunday Mass. Most recently, a priest from 30 miles away made the trek to tend to the parish. Several Catholic sisters served as lay pastoral staff for some years, before their reassignments. Until Father John’s arrival, the absence of a resident, official Catholic minister made it hard to maintain a community of faith.

In the absence of pastoral staff, Father John hears that a handful of what was once 100 families attend the parish. He’s finding out the true numbers now. But the pastoral reality here, as in many Glenmary areas is changing. “There are about 60 people who speak Spanish,” reportsFather John, due to an influx of agricultural workers in recent years who have settled in the area.

This trend is true in much of the South, where skilled Hispanic, agricultural workers are willing to do the work others reject, often at very low wages. Many, if not most, of these immigrants, are committed Catholics.
Walking into that, though, Father John has a missioner’s dream for the parish. “A year from now,” he hopes, “people will say, ‘We’re glad Father John came, because now we have our own person here, flesh and blood.’ I’m hoping in a year that the new pastoral Council they started this year is thriving. I’m hoping that the English-speaking and Spanish-speaking people, who are now friendly to each other, will find ways to cross the language barrier.”

He hopes that will happen through programs he has seen elsewhere, in which grandparents from each group adopt, in a sense, young people from the other. The young people spend time with the others’ elders. Barriers fall as the families become friends.

As Pope St. John Paul II wrote in his encyclical on the mission of the Church, “When we consider the immense portion of humanity which is loved by the Father and for whom he sent his Son, the urgency of the Church’s mission is obvious.”

That urgency of mission is what compels Father John, along with all Glenmarians, to step beyond the boundaries of comfort. But Father John doesn’t see things in such lofty terms.

He’ll just show up. That’s what a missioner does. He tells how it happens: “I’ll be able to say, ‘Hi, I’m the new priest.’ And they’ll say, ‘We have a priest again here!’”

That will the starting point for Father John to start building the parish up the Glenmary way: one family at a time.

This story first appeared in the October Boost-A-Month Club newsletter.