Missioner on the run with ecumenical exercise group

The men have gathered at 5:30 a.m. on the Roanoke River for faith, fellowship and fitness. (F3 on the cinderblock)

There’s a lot of heavy lifting in a missioner’s day. But for Glenmary Father Richard Toboso, there’s also running. And jumping jacks. And 200 push-ups. He and a handful of men from across the community in Washington County, in Eastern North Carolina, haul out of bed to be on the shores of the Roanoke River by 5:30 a.m., four days a week, for a type of exercise that goes far beyond physical fitness. 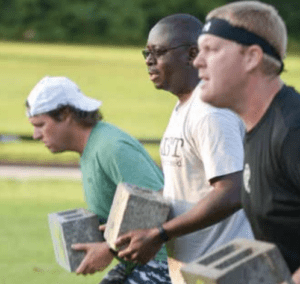 “It helps to have fellowship,” says Father Richard. He (along with Father José Carlos Miguel López) serves about 80 families at Glenmary’s St. Joan of Arc parish in Plymouth. His T-shirt today, a present from his ordination three years ago, tells the story: “I’M A PRIEST. Don’t look so surprised.” He’s not the only minister who gets up early. Jay Hardison, pastor of the Plymouth Church of Christ, is also out there, along with a bunch of other guys. It’s an ecumenical exercise.

Luckily they sleep in on Saturdays, meeting at 7 a.m. That’s what time I met them one Saturday in the park by the river, not far from the county courthouse and a handful of churches. The group, Fitness, Fellowship and Faith (F3 on t-shirts), just celebrated their one-year anniversary in Washington County. They’re part of the 10-year-old national program F3Nation. “It’s a well-rounded group,” says Father Richard. “It helps us to support each other and helps us with the gift of sharing faith—and to stay fit!”

In a way comfortable to Glenmarians, that faith sharing is community-wide. Jay explains how that’s going for him. “Richard and I formed a great relationship,” he says. “We’ve talked outside of this group. He was in my office a week or so ago. He’s actually attended church with me a couple times, and gotten to see what I do. I’m looking forward to getting to see more of what he’s gonna do!”

There’s another minister in the group, from a nearby Missionary Baptist Church. But the other men are from all walks of life, just looking for, as they say, fitness, fellowship and faith.

“To be honest, for there to be a priest in Eastern North Carolina is rare,” says Jay. “But it gives us a chance to get to know him, and for him to know us. He’s a very good man.”

It was a bit by chance that Father Richard got to know these men. He’s been running for years. When Glenmary priests came to live in Plymouth in 2021, he sometimes could be seen in the early morning, jogging.

A woman at St. Joan of Arc had told him about her son’s involvement in F3. Then F3 found him: “It was on Friday and I was running on the highway,” recalls Father Richard. “A man stopped and parked and said, ‘Please, can I talk to you?’ He invited me. They were so welcoming and so proud that I joined them!”

The program doesn’t have a leader per se; it’s peer-to-peer. Father Richard explains, “Each person gets an opportunity to lead the activity for that day. So if I’m leading on Tuesday, I have to put down a list of things that we have to accomplish between 5:30 to 6:15.

“We begin by gathering together in a circle, say hello to each other, and then begin exercise.” That includes all manner of calisthenics, which, if he needs ideas, can be chosen by that day’s leader from the F3Nation website. “Then, at 6:15, we gather back in a circle, and we share personal struggles, and also what’s going on in our families. Then, after sharing, we have praises, what we are thankful for. If you have something going on in your community, in your church, or somebody’s sick, we have a prayer request. We end by somebody praying.”

This Saturday, after the “Circle of Trust,” one of the men, Chuck, explains, “I’ve always tried halfway to keep in shape a little bit. But now I feel like I’m accountable to this guy. I mean, if I stayed in bed this morning, I’d be letting these guys down.”

“I feel the same way,” says Pastor Jay. “I’ve known Chuck forever. But seeing Chuck every day he can share. I can come and say, ‘Dude, I need you to pray for me.’ Or ‘I need a hand.’ Seeing each other every day helps us form those bonds.”

The prayer circle is the key for this solidarity. “The guys are vulnerable. We can come and say, ‘Look, this is what we’re struggling with. We can pray for that guy.’” For Father Richard and the other men, being out there in the park and running around the blocks is another key: public witness to prayer and solidarity beyond racial and denominational boundaries.

But at another level, it’s about the exercise: “You wouldn’t do half of this if you’re by yourself!” says Jay, laughing. “I’d have a few pushups, and I’d be done! But having these other guys here… We build each other up.” There is a similar network around the U.S. for women, Females in Action.

So, is there a groundswell from Catholic community to participate? Alas, says Father Richard, smiling. “I’m the only one, because many people are afraid to go out at 5:30 in the morning.” He’s joking, of course, but, who knows? Maybe someone will be setting their own alarm soon.