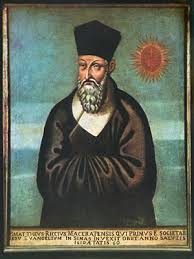 Father Ricci was far ahead his time as a missioner—so far ahead that his approach, now widely accepted, brought him under scrutiny by Church authorities. He was an Italian Jesuit who became one of the first to introduce Christianity to the people of China. His approach was novel for European missioners: he took on the practices, even the attire, of the local culture so that he could more effectively communicate the gospel.

He first landed in a Portuguese colony (Macau). After some time he became the first European to enter the city of Beijing, known as the “Forbidden City.” A highly educated Jesuit, he had knowledge that the emperor wanted: updated astronomy and calendar reckoning. He was a bridge of academic knowledge and spirituality between China and the West.

A skillful mathematician and cartographer, he had become fluent in Chinese–one of the first Westerners to do so—during his studies in Macau. He demonstrated to Chinese scholars that Christianity is a fulfillment to their existing faith. Many converted to Catholicism.

In addition to dressing like the Chinese elite, he also Christianized local customs. Franciscan and Dominican missioners would have none of it. Their complaints to Vatican offices resulted in a banning of Ricci’s approach to mission for hundreds of years.

The renewal of mission expressed in Vatican II marked a return to Ricci’s insight of inculturation as key to mission. Said Pope St. John Paul II, “One of the aspects that make Father Ricci’s work in China original and enduringly relevant is the deep empathy which he cultivated from the first towards the whole history, culture and tradition of the Chinese people.” That’s a key to Catholic mission everywhere today.