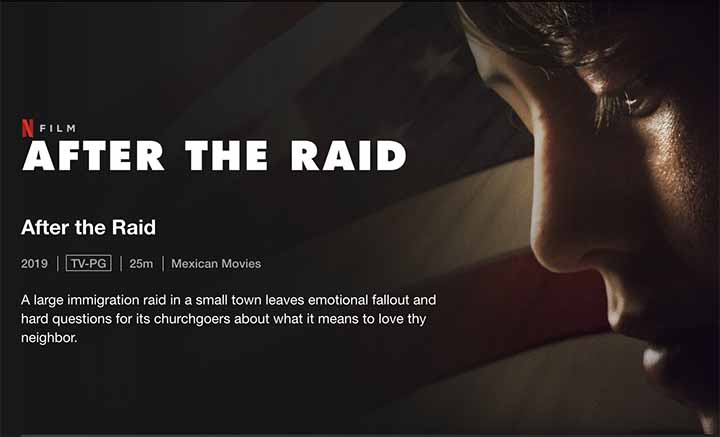 A new “Netflix Original Documentary” explores the emotional aftermath of an IRS/Immigration raid that took place in Grainger County, Tenn., in 2018 and Glenmary Father Steve Pawelk plays a central role.

Entitled “After the Raid,” the film makers approach assumes viewers are familiar with the Southeastern Provision Slaughterhouse raid, in which 97 men and women were detained. At the time it was the largest such raid in more than a decade and was heavily covered by national media. The plant’s owner is alleged to have skirted payroll taxes by hiring undocumented immigrants and paying them in cash.

The raid wrought havoc in the local community, with families being split apart and some losing their only source of income. When news broke of the raid, loved ones of the detained gathered at a place they felt safe, St. John Paul II Catholic Church, a Glenmary mission. Father Steve was pastor there at the time. 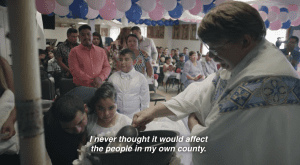 Father Steve was interviewed multiple times by local and national media at the time, and several of those deported were members of his mission parish. In the documentary, he is seen administering baptisms, celebrating Mass, and praying with a young mother named Yahel whose husband was taken in the raid.

“I never thought this would affect people in my own county,” Father Steve says in the documentary. “I kept thinking, the criminals on the border, that’s who [the President] is talking about, the mass murderers on the border and rapists on the border.

“Others would say I love these people, but they did wrong, and wrong is wrong, the law is the law and you should just follow the law,” he added.

Director Rodrigo Reyes’ documentary avoids taking political sides in favor of an emotional snapshot of the raid’s effects. Yahel, for example, cries as she recalls losing her husband.

“You’ve built a family and a life with that person, and suddenly he’s gone in such a drastic way… We got up and said goodbye thinking we’d see each other that afternoon.”

The documentary became available on Netflix Dec. 19 and is 25 minutes long. Netflix’s official synopsis reads, “A large immigration raid in a small town leaves emotional fallout and hard questions for its churchgoers about what it means to love thy neighbor.”

Netflix subscribers can watch the film on their favorite streaming devices. The trailer is available online HERE.

Father Steve has since been assigned to be Co-Director of the Novitiate at Glenmary’s Cincinnati, Ohio headquarters. Glenmary Father Neil Pezzulo is the new pastor of St. John Paul II in Grainger County.