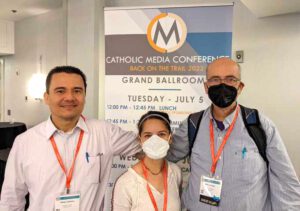 Below is a list of Glenmary’s awards and judges’ comments.

Magazine of the Year

Second place for Magazine of the Year: Mission Magazines.

Judges’ comments: As we know, it takes a talented team to get your message across in a package that seems easy to put together. Glenmary Challenge succeeds admirably in its quarterly magazine for missionaries to rural America. It’s simply-worded articles and strong photos illustrate serious work these missionaries are doing, as well as a mobile health clinic in Tennessee. The profiles show “real” people like “A priest with the smell of coffee.” And they don’t take themselves too seriously (Do you have a goat in your garden?”).

Father Don Tranel earned a first-place nod for Best Essay: Mission Magazine for his “A Day in the Life of a Country Priest” article on Smith County.
Judges’ comments: This is terrific. A really moving, clearly written piece on missionary work. I tend to think of missionary work as service, but this is truly a modern journey into a community to expand the Church.

Assistant Editor John Feister and Spanish-Language Coordinator Omar Cabrera’s team up for “Going the Extra Mile” on the crab worker ministry won first-place for Best Feature Article: Mission Magazine AND first-place for Best Story and Photo Package by two or more individuals. Art Director Cassie Magnotta contributed to this package.
Judges’ comments: (1) Just as the title states, this package went the extra mile (and then some) to provide intimate and in-depth portraits and coverage of “faraway spots. both geographic and societal.”
Author John Feister paints the people, the place and the parishioners. Tells the story vividly of the people working in the seafood processing business and their need for faith. He delivers the people and the process and the scene to readers.

John Feister’s photo of Father Richard elevating the host at Matamuskeet won third place for Best Photo-Sacramental.
Judges’ comments: I liked the cropped version of this photo, but I wanted to be even closer to the faces.

John Feister also took home second place for Best Story and Photo package by an individual for “When you see me think of Jesus,” which covered our three ordinations in 2021.
Judges’ comments: Engaging interest piece capturing an important religious event.

Finally, Omar Cabrera earned his first solo CMA award with an honorable mention for Best Personality Profile-Religious Leader for his article “A priest with the smell of coffee” about Father Josè Carlos Miguel Lopez.