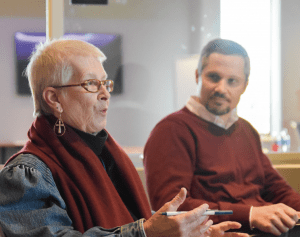 The Glenmary Ecumenical Commission has launched a new website aimed at bridging the divide between Christians. The website can be found at GlenmaryUnity.org.

“The purpose of the website really is to start a conversation between Catholics and Evangelicals on deepening Christian unity,” said Nathan Smith, director of Catholic-Evangelical Relations for Glenmary. “The website will include resources to support others in the work of Christian unity, including timelines to get folks up to date on the current state of ecumenical dialogue. I’ll regularly include stories of Catholics and Evangelicals working together and the site will act as a platform for others to connect with Glenmary regarding the work of Christian unity.”

The Glenmary Ecumenical Commission has a national role in fostering relations between Catholics and Evangelicals on behalf of both Glenmary and the United States Conference of Catholic Bishops. The commission is made up of three Glenmarians, three representatives from Protestant denominations, and the director. The commission seeks to reduce alienation, enhance understanding and foster reconciliation between Evangelicals and Catholics through dialogue based in friendship.