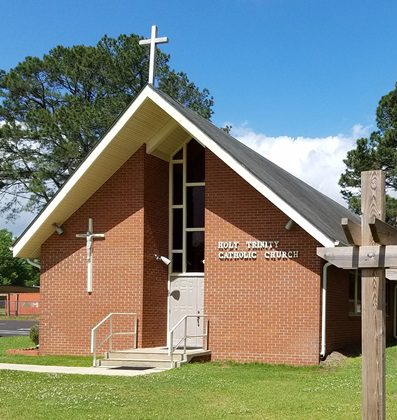 For Immediate Release
Media Contact: John Stegeman,
Manager of Communications
Phone: 513-881-7442
Email: jstegeman@glenmary.org
Editor’s Note: Stay tuned for the Autumn edition of Glenmary Challenge for a closer look at this mission and its pastor, Father John Brown.
CINCINNATI — On Aug. 1 Glenmary Home Missioners announced that it will assume care of Holy Trinity Catholic Church in Martin County, N.C. effective Oct. 6. The announcement came from Glenmary president Father Chet Artysiewicz.
The move is Glenmary’s first expansion since 2011 when the society opened three missions in east Tennessee.
“We hope to build upon the foundation laid by the priests and religious who generously served Martin County before us,” said Glenmary President Father Chet Artysiewicz. “Williamston and Martin County meet the criteria Glenmary examines before assuming pastoral responsibility for an area. We are also happy to enhance Glenmary’s presence in eastern North Carolina.”
Glenmary is known for establishing and developing new missions but has at times taken over existing missions like Holy Trinity. The Diocese of Raleigh established Holy Trinity in 1951. For most of its history, the church has been served by visiting priests and administered by religious sisters. Glenmary was invited by Bishop Luis R. Zarama to bring its mission expertise to Martin County.
“The increased presence of the Glenmary Fathers and Brothers in our diocese is a special blessing for our missionary efforts to give witness to the Catholic Faith in rural and small-town Eastern North Carolina,” said Father James F. Garneau, chair of the Raleigh diocese’s Home Mission Society board.
Glenmary has a long history in western North Carolina but first came to the Diocese of Raleigh, which covers the eastern half of the state, in 2004. Holy Trinity will be Glenmary’s third mission in eastern North Carolina, along with Holy Spirit mission in Bertie County, and St. Joan of Arc in Washington County.
Father John Brown, a Glenmarian of 40 years, was approved by Bishop Zarama to be Holy Trinity’s first resident pastor. Father Brown’s most recent assignment was as pastor of Glenmary’s Holy Family mission in Blakely, Ga.
Holy Trinity is located at 830 East Boulevard, Williamston, N.C.
Glenmary Home Missioners is a Catholic society of priests, brothers and lay coworkers dedicated to serving the spiritual and material needs of people living in mission counties throughout Appalachia and the South.