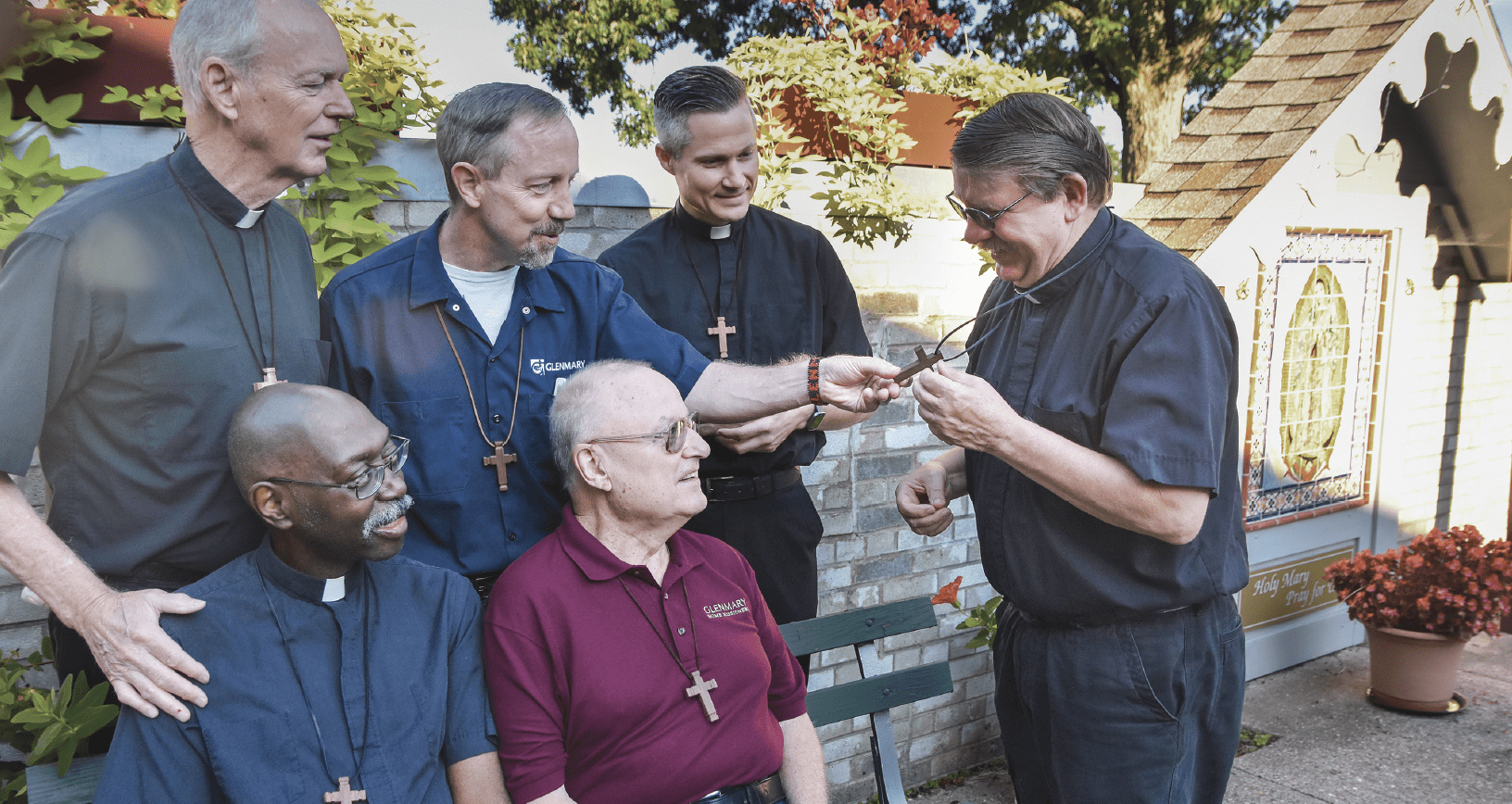 Glenmary missioners examine the Glenmary Mission Cross, a new symbol of the community.

When years ago, Glenmarians began discussions to adopt a symbol, some interesting options arose. One of them was a habit, like other Catholic religious wear. A second proposal was a lapel pin. The third one was the cross. 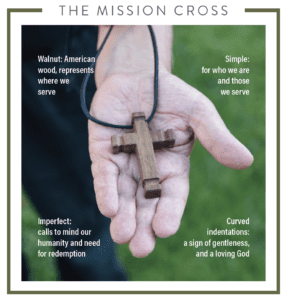 But why adopt a symbol in the first place? “Symbols can unite, symbols can communicate something important,” says Father Aaron Wessman, Glenmary’s first vice president. “Symbols remind us who we are and how we should live. It’s why you have a crucifix in every church.”

The conversation about choosing a symbol that Glenmarians could use to identify themselves began in 2019, initially as an assessment on how the congregation presents itself out to the broader Church and more specifically to vocation prospects. Later, talks evolved into whether that symbol should and could be used in a more general way.

After a long discernment, Glenmarians ruled out the habit and lapel pin, and chose the Mission Cross as the symbol of the fully professed members of the congregation: priests and brothers. They also decided to ask Brother Joe Steen, a skilled woodworker, to craft a specially designed cross.

At the 2022 general assembly of the congregation, the executive council held a special ceremony to individually hand to each member a mission cross designed by Brother Joe, and a statement of purpose.

The power of the cross

Glenmary Father Steve Pawelk has worn a chest cross consistently since his early years as a priest. He says that it has helped him in many powerful ways.

“I have found it very helpful when I’m doing counseling or listening to people and I don’t know what to say,” Father Steve explains. “Grabbing the cross becomes a very quick prayer. I just grab the cross; In temptation, I grab the cross… Jesus, my Lord and savior! So it becomes a way to live a stronger, disciplined moral life and a way to gather the Holy Spirit.”

Father Steve adds that many times the cross becomes a point of conversation with random people, especially in mission areas. For instance, “small children and babies love crosses,” and they reach out to touch them.

That opens the door to start a conversation with their parents or with the kids themselves, and hopefully talk about Christ and living a virtuous life.

The sheet that Glenmarians receive along with their cross states: “Remaining convinced of the importance of our special service to the home missions, we are doing now and we shall do in the future what Father William Howard Bishop planned for this society–to share in the saving mission of Jesus Christ.

“Thus bound in a covenant we, perpetually professed members of the Glenmary Home Missioners, wear this cross as a sign of our commitment to Christ, his mission, and each other.”

In fact, one of the reasons why Glenmarians didn’t choose a habit as their symbol is because Catholics are a minority in the mission areas, and a habit sometimes becomes a point of confusion or concern with non-Catholics. The cross, on the other hand, is a symbol that unites Catholics with other Christians, not only in mission territory but worldwide.

Brother Joe adds that the growing secularization that humanity is going through makes symbols like the cross lose the deep meaning that they have for Christians. He hopes that the faithful use of the cross by Glenmarians contributes to preserving those foundational values.

This story by Omar Cabrera first appeared in the Autumn 2022 edition of Glenmary Challenge magazine. Read the current edition HERE.