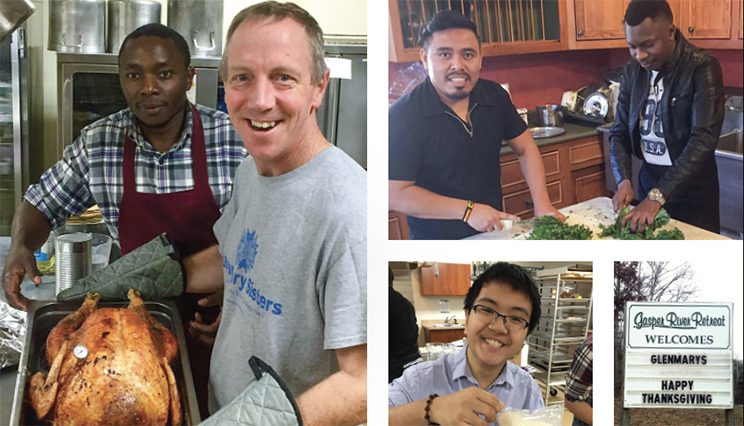 On a uniquely American holiday—Thanksgiving—men from Kenya, Uganda, Vietnam, Mexico and the United States come together around a table. They are Glenmary’s men in formation, and this special time together allows them to give thanks for each other, share stories, and experience a bit of the community life they can expect when they make their Final Oaths as Glenmarians.

The tradition dates back almost 50 years, but no one is sure whose idea it was. Glenmary students in different stages of formation have often studied in different places, but at Thanksgiving they gather as a group along with Glenmary’s vocation and formation teams, and others, for Mass, meals and fellowship. 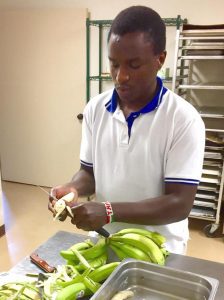 In recent years, with Glenmary seeing a rise in international vocations, the gathering has taken on new importance. Not only do the students get to know each other better, but they also learn about each other’s cultures. The students from outside the U.S. get to experience Thanksgiving, a cultural touchstone.

“They get to learn what the Thanksgiving holiday means in an American cultural setting within their Glenmary family,” says Brother David Henley, Glenmary’s vocation director. “It’s participation learning, not studying in a book. They’re participating and celebrating what a Thanksgiving gathering is all about.”

For the last decade or so the gathering has taken place in the Diocese of Owensboro, Ky., at a Catholic camp. Brother David buys and prepares the turkey. Based on a shopping list from students, he also buys ingredients for various cultural dishes that make for a unique meal.

Glenmary aspirant Thomas Nguyen, who was born in Vietnam and immigrated to the U.S. at age 3, enjoys the intercultural and community-building aspects of the gathering.

“We all come together and cook different dishes from different countries and it’s really beautiful,” he says. “It’s a fun time to be with your brothers. We don’t always get to see each other.” 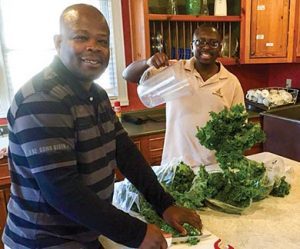 The gathering is often joined by Glenmarians who live in the area, Glenmary sisters and others. Sometimes as many as 30 people attend. The event is a three-day affair. Past years have included talent shows, cornhole tournaments, hiking and more.

In the end, that’s something to be thankful for.

This article first appeared in the Autumn 2019 edition of  Glenmary Challenge magazine.