Home / News and Notes / From storefront to permanent church

From storefront to permanent church 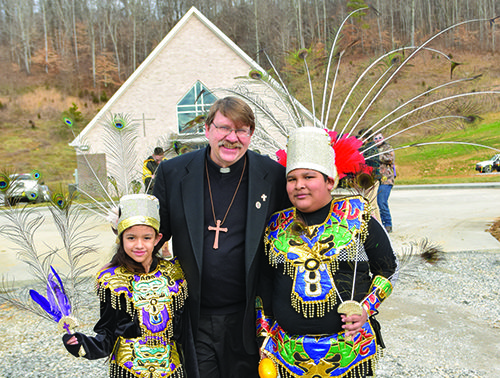 Ostrich-plumed hats of the Knights of Columbus and the peacock-plumed hats of a Latino dance troupe weren’t on the minds of Glenmarians who scouted a home for a new mission back in 2010.

But Feb. 2, at the dedication of St. Teresa of Kolkata parish in Union County, Tenn., the celebratory feathers were everywhere. The Maynardville congregation gathered under the leadership of Diocese of Knoxville Bishop Richard F. Stika to celebrate a series of ancient Catholic rituals unique to the Mass of Dedication. It was the centerpiece of a three-day celebration.

“You know, each of the three days had its own special moments and special meaning,” says Glenmary Father Steve Pawelk, pastor. “For me the best part, overall, was to see the joy on people’s faces, their sense of accomplishment, and that they really own it. They took pride showing that to their friends. That’s where there was great joy for me.” It was a climactic moment for a group of Catholics who had devoted eight years of effort establishing a parish.

They studied the situation in and around Union County, visited organizations in that and surrounding areas and listened to anyone willing to talk.

“We told them we were considering starting a Catholic church and inquired whether there was a need,” explains Father Don.

They were encouraged by the conversations. Though Maynardville is fairly close to the outer rings of Knoxville in one direction, in the other is rural territory. Glenmary wanted to find a location where several parishes could be developed. Maynardville fit the bill.

Father Steve was pastor from the beginning. He presided at Mass first in a carport until the parish could become situated in a local storefront. It remained there for years until this new, permanent church, was built.

The building’s construction was a labor of love for the community. Skilled workers who are members of the parish helped with construction. For example, says Father Steve, some families have bricklayers. “One of our parishioners is a flooring professional. He brought in 20 different tiles to choose from.” A selection committee was put to work. Father Steve was the tiebreaker.

Another parishioner is a painter, another is a landscaper, one makes signs. “We’d have one Sunday when people would have a chance to vote on the color of the paint and the stain on the brick. All of that was presented to the congregation, then we went with the majority.”

A group of volunteer carpenters from Ohio dedicated time at a key point in construction. Contractors were involved throughout.

Then there was Brother Joe Steen’s handiwork. “His woodworking talents are unbelievable,” says Father Steve. “First and foremost is that those floorboards come from Sacred Heart Cathedral in Knoxville.” (That cathedral was replaced with a new, bigger one just last year.) “We took all the pews and many other fixtures from the old cathedral. Brother Joe transformed those pews into that flooring. I don’t know how many hours and days that took.”

He had the wood planed and grooved it for fitting. “Then he laid it, sanded it and so forth. Then Brother Joe built the altar top [with wood from the pews]…He built the altar on which the tabernacle sits [rebuilt from the altar of the temporary storefront church]. He built the stand for the baptismal font and he made the [hymn] book rack.”

It was a dream-come-true for Father Steve. The result is a truly beautiful, new, Catholic church. The crowded storefront days are over. 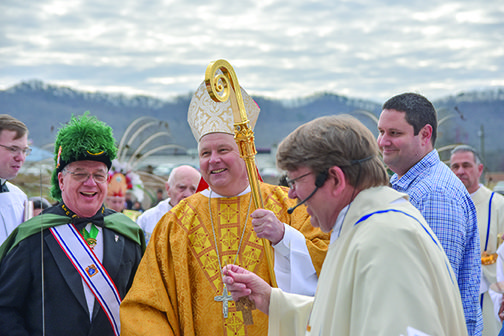 A Weekend of Dedication

A church dedication is a ritual event whose actions publicly identify the church building as a sacred space. The local bishop performs key actions during Mass, which is celebrated by the whole community.

The day before the dedication Mass, frantic last-minute details were wrapping up. Brother Joe had finished the altar and was painting the aperture, which is a small hole drilled into the altar. There the bishop would place a relic of St. John Neumann, a missionary to the U.S. and later Bishop of Philadelphia.

Flowers were being situated, and vestments were being brought from St. Teresa’s storefront church by Glenmary Deacon Richard Toboso (to be ordained a priest this spring) and Novice Willy Kyagulanyi. Parishioner Walter Stone was finishing up landscaping and parishioners from the Mercado family were doing brickwork on the permanent entrance sign as parishioner Martin Shafer (“The Sign Guy”) put up a temporary one for the event. A dump truck pulled down the driveway unloading gravel for mud-free passage. Final paving of the driveway has awaited the end of construction.

Friday evening the parish hosted a Gospel sing, when people got a first look at the finished church interior. Several country-style singers led parts of the program. This is Tennessee, after all. A children’s choir from Knoxville’s St. Joseph school, where some parishioners attend, was one of the evening’s highlights.

Saturday’s Mass of Dedication was a festive event, one that reflected the cultural diversity of the region. Among those at St. Teresa of Kolkata’s parish are people  who have lived in Union County most of their lives, living alongside Knoxville retirees, nearby tourists who built houses at local resort Norris Lake and “halfbacks,” retirees from the North who found Florida too hot and settled halfway home. Then there is a booming community of Latinos, who came to this area for agricultural and manufacturing jobs years ago and settled with their families. Like European immigrants of yesteryear, they are hardworking, upwardly mobile and deeply Catholic.

The bishop was greeted by Matachines dancers, led by parishioner Santiago Soto. His dancers perform a Hispanic ritual praying for purity, stamping out sin as they go. The troupe of Latino parishioners had shiny new outfits for the event and had practiced weekly.  Traditional ostrich feathers, a key part of the costume, were too costly, but Father Steve had a solution: “My brother Pat raises peacocks!” he says with a laugh. “I had to get an extra-large tube to ship the feathers.”

Father Steve clarifies that the dance is fully Christian.

“All of these steps are done in praise,” he says. “They pray before, they pray after and then they form an archway. People walk underneath the peacock feathers as a blessing. It’s no different than the Knights of Columbus [Color Corps] that was there with their swords.”

Cross-bearer Brother Craig, Bishop Stika, deacons and visiting priests processed beneath plumes and swords. They stopped at the front door of the church, which was locked as a symbol of newness. The bishop knocked. Father Steve opened the door and invited the bishop in. The people gathered began to sing.

There are many elements of liturgy that followed. A blessing of the altar, walls and people with water drawn from the baptismal font happened early. There was, of course, a litany of the saints, and candles lit from the Paschal candle, signifying the Light of Christ.

During the liturgy Bishop Stika carefully placed the relic of St. John Neumann deep into the spot on the altar Brother Joe had so carefully prepared, then, with a loud, decisive strike, used his ceremonial hammer to place the cover.

The bishop poured the oil of chrism,  which is blessed at the cathedral, over the altar and worked it into the wood with his bare hands. He then proceeded to anoint appointed places along the inside walls all the way around the church. Plumes of smoke arose as the altar, bishop, people and walls of the church were incensed. Bishop Stika was effusive in his homily, marveling at the dedication and generosity of Glenmary, and the outpouring of effort and goodwill in the community. It was a long liturgy, but no one seemed to mind! 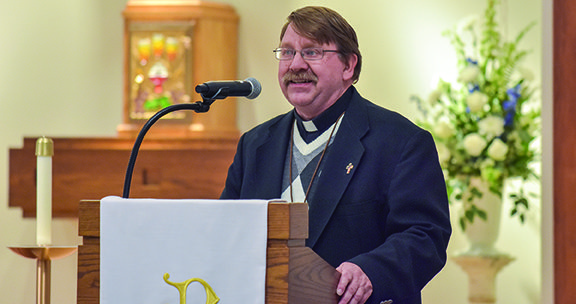 A Step on the Journey

The day after was the first Sunday Mass, followed by an open house. Some of Father Steve’s Protestant minister friends were there, as was Glenmary president Father Chet Artysiewicz and several Glenmary coworkers and volunteers. Father Steve spent time in his homily calling out the parish, as well as various people to thank for all that came to this joyful moment. Brother Joe was last on his list: “All I could say was, Brother, I love you. I couldn’t say what needed to be said—I left it at that because I would have cried.”

Father Steve is passionate in his commitment to the community of St. Teresa of Kolkata. For one thing, he’s committed to honoring the catholicity of the church, that is, its welcome to people of all cultures. “Everyone’s culture blesses the building and blesses the community. One of the things I’ve tried to assist is to give people permission to worship in the way that fits their tradition.”

Father Steve sees a lot of potential for growth beyond the current 300 members. “There were a lot of Catholics who live in the area whose friends brought them along to see the new church. I’ve had people tell me, ‘When you get a church, then I will come.’” He is hopeful.

One might think it’s time for Glenmary to move on. Not so. Says Father Steve, “This marks that we’re kind of halfway there now.” Financial independence, stronger local leadership, these are next. “But to watch the community grow and change and develop and take ownership for this! It’s amazing for a community to accomplish this in such a short time, under eight years.” He speaks as a proud father.

This story first appeared in the Spring edition of Glenmary Challenge magazine.