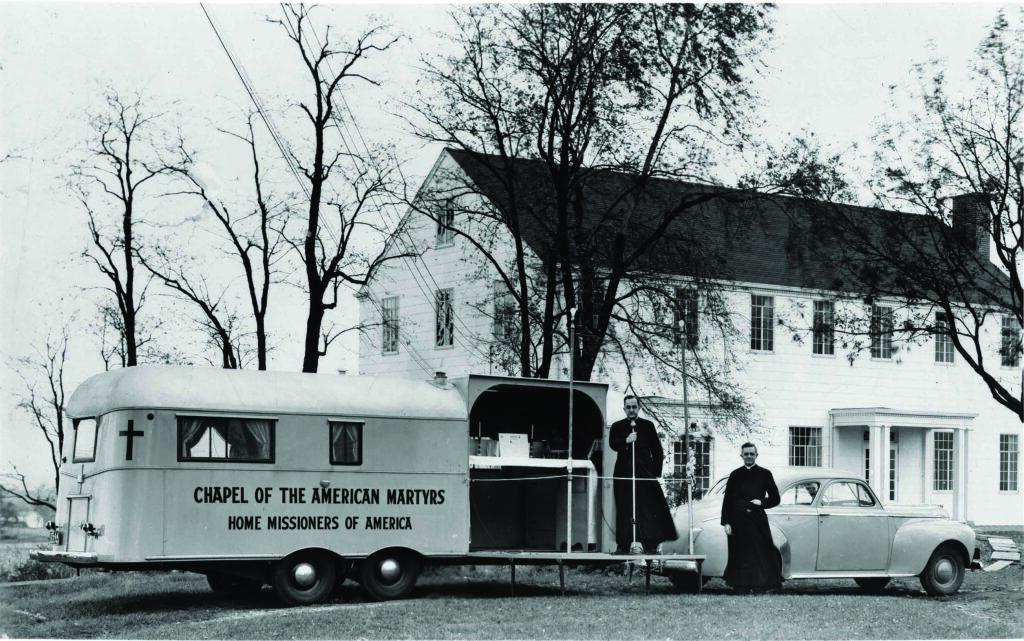 Some of Father Bishop’s earliest mission work was done from a portable Chapel of the North American Martyrs. He’s pictured with an early missioner at the microphone, Father Raphael Sourd.

Many people don’t realize that the North American Martyrs, celebrated October 19, are patron saints of Glenmary. But these martyrs have great meaning for Glenmary’s missionary style. Father Dennis Holly tells the story: “They saw that it was very important to understand the religion of the people they were trying to evangelize, and then rather than uproot it, try to build on it.”

The martyrs were French Jesuit missioners who came to the New World in the 1600s, explains Father Dennis. They conducted their ministry around the area that would become upstate New York and lower Canada, in the Great Lakes area.

They traveled on foot and by canoe, with the help of the Native Americans they encountered and sought to evangelize. Known as “Blackrobes,” they were victims of suspicion and rivalry among the tribes they served. Undeterred by threats, they continued their mission into the lands where the Gospel had not been preached. They knew they were in grave danger, yet persisted. Ultimately they were martyred for their faith by warriors, between 1642 and ‘49, explains Father Dennis.

The Jesuits’ mission was informed by cultural sensitivity. he observes. “There’s a hymn associated with this group of Jesuits where they refer to God as ‘Mighty Gitchi Manitou,” even using the Huron name for God. That hymn, “Huron Christmas Carol,” Canada’s oldest song, was originally titled “Jesous Ahatonhia” in Huron language. “It was a way of saying, ‘God is already present in your life. We want to help you to understand him better.’”

One can see why Father Bishop, Glenmary’s founder, would have seen them as patrons for his budding missioner society. That approach is much of what Glenmary is about. “Generally speaking, Jesuits would go to a place and figure, This is where I’m going to be for the rest of my life. So they would make an effort to learn the language, the culture, the people.”

Father Bishop asked himself the question, “How do you communicate the Gospel? He became very conscious of the need to reach out.” That was during his 20 years as a rural pastor in Maryland, as the idea of Glenmary was forming in his head and heart. As Father Bishop was at the stage of reflection, in 1930, the Jesuit martyrs were canonized. “Here’s a man with a mission, a dream,” Father Dennis says of the founder, “and suddenly these missioners are in the public eye.”

So he made the connection. He wanted to hold up the idea, as Father Dennis says, “what does it mean to be committed to Jesus? People do that in different ways.” The North American Martyrs’ pointed out a way for him: total, lifelong commitment to Gospel invitation, in the language and way of the people they served. That’s the spirit of Glenmary today: to go into mission territory, meet the people where they are at, and invite them to a fuller understanding and experience of Jesus.