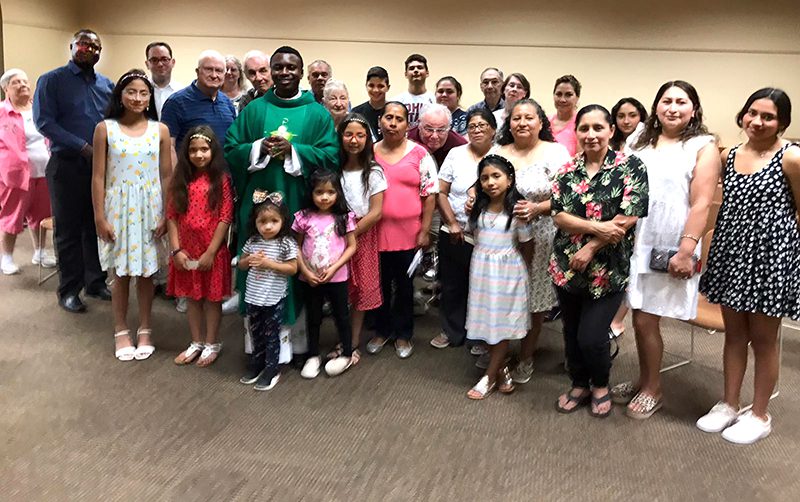 The newest of Glenmary missions (Overton County, Tennessee) celebrated its first Mass last Friday, June 17, in the town of Livingston, in East Tennessee.

Father Samuel Mungai offered the Eucharist, which took place in a hall of the town’s public library. Livingston is located about an hour and a half northeast of Nashville.

“I expected to have about 10 people. I was amazed that half an hour before Mass there were already thirty,” said Father Samuel. “They settled in silence, making the library room a true space for prayer, a Church.”

This mission in Overton County is the latest that Glenmary has started, at a time when many parishes are closing in different parts of the United States.

Lay Missionary Pastoral Minister Lorenzo Aju, who leads the mission, said it was exciting to see the response of the people. One of them, for example, donated flowers to place in front of the humble table that served as an altar. At the end of Mass, parishioners shared snacks and drinks.

Lorenzo, with the sacramental support of Father Samuel, started the new Catholic mission last April. He and his wife moved to Livingston from Houston, Mississippi, where Lorenzo worked for more than 15 years in a parish that Glenmary founded.

Overton County has a population of about 23,000 people, according to the US Census. The poverty rate in the county is 16.3 percent.

Glenmary President Father Dan Dorsey is excited about the birth of this new mission. “I think Lorenzo has a great presence. He is quite kind (…) He will come into people’s lives in a non-threatening, wonderful way and will represent the Catholic Church very well.”

Regarding the expectations for Overton County, Father Dan explains that “Maybe there will be a parish there, maybe there never will be. I think at some point there will be, but that may be in 10 or 15 years. The important thing is to achieve a stable Catholic presence in the town and in the area.”

Father Samuel announced that the next Mass is scheduled for Friday, July 22, in the same place.