Home / News and Notes / First Hispanic Glenmarian: A priest with the smell of coffee

First Hispanic Glenmarian: A priest with the smell of coffee 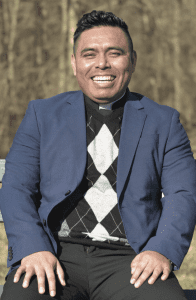 Father José Carlos Miguel Lopéz is the first person of Hispanic origin to be ordained a priest for Glenmary.

As a young boy, Father José Carlos Miguel López dreamed of becoming a professional footballer. But the Holy Spirit had different plans for him. Now, he is the first Hispanic priest in the history of Glenmary.

“What would I not have given to be a footballer!” says Father José Carlos, a big soccer fan. Born and raised in the southern Mexican state of Chiapas, he is one of 12 siblings. His father was a coffee producer and José Carlos would help with the crop.

He enjoyed the work at the coffee plantation so much that he didn’t want to go to school. “I wanted action, I wanted to work, to be always moving, always helping my dad,” he says. “I thought that school was for lazy people who spent all day sitting in classrooms.” Finally, his parents persuaded him to start classes a year after he was supposed to do so.

One of the factors that helped José Carlos to discover his vocation was his parents’ influence. Even though the family lived in a predominantly Protestant village, “my parents always instilled Christian values in us and the importance of attending Mass,” he says.

The community where he grew up didn’t have a high school. For that reason, young José Carlos moved to a facility where a Catholic priest offered lodging to low-income students so that they could attend the local high school. A friend and supporter of that project was Glenmary Father Vic Subb.

Father Vic recalls that while he served in a parish in Georgia, he helped Father Manuel Velásquez to visit the United States to raise money for his ministry. “He had about 100 teenagers that lived at this facility, which was like a big gym, 50 girls, 50 boys, more or less.”

During a visit to Mexico in 2006, Father Vic talked to the students about Glenmary and José Carlos became interested. He decided to enter the San Juan de los Lagos Seminary, very far from his home, an institution with which Glenmary has a formation agreement.

He says that the message resonated to him because one of his brothers worked in a rural area in Alabama where the Catholic Church had no presence. “When my brother told me about there being no Catholic Mass where he was, that kind of moved my heart,” Father José Carlos recalls. “I said, well, if I’m a Glenmarian I can serve these small towns where [many] people perhaps don’t speak any English.”

Father José Carlos now serves in Glenmary’s Holy Spirit and St. Joan of Arc missions in Bertie and Washington Counties, N.C., respectively, where a high percentage of the parishioners are Spanish-speaking immigrants.