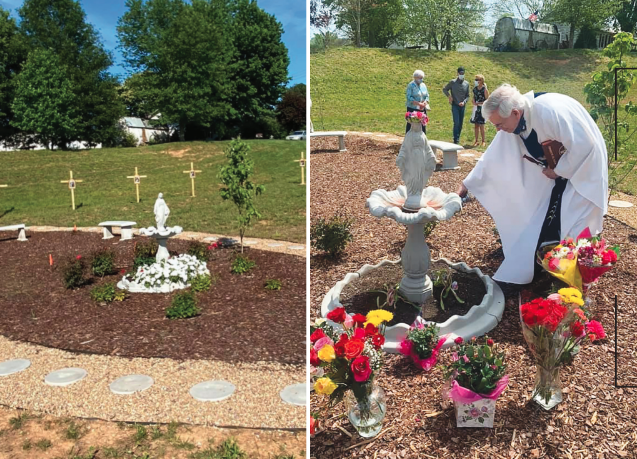 Father Tom, pastor at St. Michael the Archangel mission, dedicates the rosary garden, on Mother’s Day, in 2021. The garden not only is nurturing parishioners’ faith; it has become a sign of the Catholic faith to the people of Unicoi County, Tennessee.

Sometimes things turn out unexpectedly. Like a rosary garden becoming a bit of a playground. But that’s alright with Glenmary Father Tom Charters, pastor of St. Michael the Archangel parish in Erwin, Tennessee, nestled in the Appalachians. “This is probably not something you’d want to include in your article…” he begins. But actually, the children using the rosary garden as a place on the parish grounds where they can feel at home is a very good thing.

The rosary garden, built last year, dedicated on Mother’s Day, is offered as a place for private devotion and for public witness. It’s on the side yard of the Church, which itself is a multipurpose building under expansion this year as the parish grows. “It adds beauty to the area,” says Father Tom, speaking of the garden. “People can’t miss it when they’re driving by.”

The garden itself is a circle of circular concrete pads, each representing a rosary bead. In the center is a statue of the Blessed Virgin Mary; in between is a sea of pebbles and a two benches. From time to time you’ll find beautiful floral bouquets in the garden.

Parishioners will find a quiet moment to spend some time in prayer there. “I pray it every day, myself,” says Father Tom “and we have a couple of people who come here for personal devotion.” The newest addition to St. Michael’s staff, Pastoral Associate Miguel Perez, is holding devotion there each Monday evening. Miguel and his wife, Gladys, along with their 5 children, moved to Erwin from California a few months ago. (Miguel assists Youth, Music, and Hispanic Ministry.)

There is a healthy population of Hispanic people in the area, who are Catholic. “They pray the rosary very strongly,” observes Father Tom. He sees this not only at church, but also when he celebrates Mass with migrant farmworkers who live and stay at local farms during growing season. “I’ll see a number of the men there having a rosary around their neck,” he says. “It’s a sign of their faith, a connection.”

After Sunday Mass, or perhaps while their parents are attending a parish program during the week, the children are at home in Mary’s Garden.“They bounce from bead to bead, just having fun,” says Father Tom. And they make up games with the stones—placing some on one bead and racing around the beads to be the first one back. “After they leave, you have to sweep off the stones back into the little section!” says Father Tom, with a laugh.

But a wise parishioner put it all into perspective in a comment to Father Tom: “Isn’t that neat? Mary’s children are running around, having fun in her garden.” Mary, mother of young Jesus, certainly would appreciate it. She knows her children are strong and safe in her care. And the church of St. Michael’s knows they will grow in faith. That’s mission work.