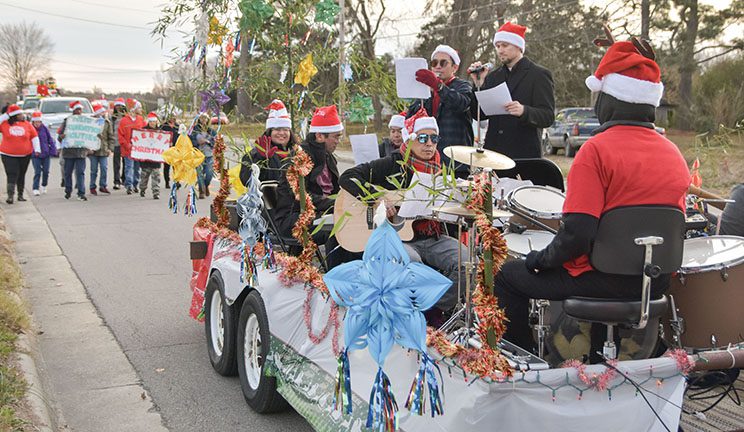 Every year during the weeks leading up to Christmas, Glenmary’s Holy Spirit mission in Windsor, North Carolina, provides a treat for the community. Actually the whole community of Windsor, in Bertie County, is either lining the streets or marching with their own organization in the annual Christmas parade. But everyone knows that Holy Spirit will show the most, well, spirit.

“It’s a good time,” says Glenmary Father Aaron Wessman, pastor at Holy Spirit until his recent election as Glenmary’s First Vice President. He’s talking of all the fun in preparing one of the parade’s stand-out floats, complete with a rock ensemble of keyboard, guitars, drums, singers and colorful Filipino decorations. “People enjoy themselves,” he says. “People begin to remember that the Catholic church is part of this community, that we’re involved. They look forward to hearing our music every year.”

In fact, one year when the parishioners decided not to enter the annual competition for best float, the Chamber of Commerce parade organizers missed them, and awarded them the best float prize—again—anyway. “Which is kinda neat,” Father Aaron says with a smile.

Holy Spirit parish boasts a sizable population of Filipino immigrants, mostly due to an employment opportunity in the local school system. Eastern North Carolina has a notoriously hard time staffing schools: it is a remote area, with very high poverty, where education wasn’t emphasized in the distant past. This is part of the old, plantation-dominated South. So the state of North Carolina set up an incentive program to recruit teachers. The result in Windsor is an impressive population of Filipino educators, all Catholic.

“Most of us come from one set of islands,” says Monet Baluyot as she and a group of parishioners put last-minute touches to the parade float. The group has been working on the float in the evenings over the past few weeks. What islands? “Cebu, Bohol, …” she lists the names of a handful of islands that the teachers, their friends and family are from, “and they speak a common native language, Bisaya.” But there’s not much time to talk: her mind and others’ are more on the project at hand. This is a forward-looking group.

At one end of the parade float you’ve got Glenmary Brother Virgil Siefker helping place a large, paper star onto a bamboo plant, a popular Filipino Christmas decoration. The ornamental paper star, a parol, is symbolic of the Star of Bethlehem. There are stars on lots of bamboo plants, all mounted on the float and the white Ford pickup truck that will tow it in the parade. The truck’s bed is jammed with loudspeakers, amplifiers, a generator to run it all; the float has crowded seating for the Santa-hat-clad musicians.

The project is being coordinated by Boy Baluyot, Monet’s husband, whose driveway the float sits in. Father Aaron hops aboard for one final music rehearsal, coming off of a stepladder where, in clerics and Santa Claus hat, he has been hanging paper stars. A few men have hitched the float to the pickup truck.

Now the guitarist, Froilan Romero, has shown up, and the drummer, and bass player, and a few vocalists. It’s a cheerful scene, if a bit rushed. Sound checks are underway as the group starts singing a song that will keep popping up during the parade, “I Saw Mommy Kissing Santa Claus.” Father Aaron seems at home with microphone in hand.

Monet says that when the judges wouldn’t let Holy Spirit drop out to the competition for best float, she realized what a presence they had become in the community. “There are only a few Catholics in this place,” she says, “and they don’t know much about us. So this is our way of letting them know that we’re here. I really enjoy this!” She adds that Father Aaron has one of the best singing voices in the group.

“It creates a greater sense of unity for us, the parish, as we go through the process,” says Father Aaron. “They’ve been preparing, practicing, planning and executing music for at least a couple of months now. It’s brought us together on several Sunday afternoons and evenings, so we have huge food celebrations. We practiced music. So not only is this big in the Windsor community, but it’s also really a lot of fun.”

The big part, aside from the fun, is that it has something to do with the mission of the Church. “Not having our own church building means sometimes not being able to have an appropriate amount of advertising, and this really is advertising for us, it’s a type of evangelization.” After seeing the sign, perhaps for the first time, he notes, “People wonder, and will call and ask questions.” 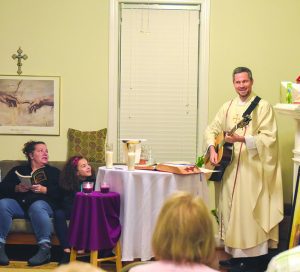 Soon everyone has arrived, squeezed in to their places on the float, to start rehearsing again as the whole affair moves onto the four-lane road heading to town. The highway ride is an adventure in itself, as décor flaps in the wind, music blares, and Brother Virgil brings up the rear in his own pickup truck. 18-wheel-truck drivers, as they brisk past in the right lane, take long, amused stares at everyone in Santa Claus hats playing instruments and singing their parts as they whisk along. At journey’s end the float takes its place in a parade that will spill out over the next mile.

Meanwhile other parishioners gather for a marching contingent—did we mention that this is a big deal for everyone? They carry a large banner proclaiming, “Holy Spirit Catholic Church.” Soon the parade starts, and for the next hour, the population of Windsor who are not in the parade will watch as float after float drifts by. They will enjoy when the Catholic float, the float with the most spirit, that is Holy Spirit, comes by. And they may even notice when Maayong Pasko—“Merry Christmas” is overheard among the marchers.

This story first appeared in the Winter 2019 edition of Glenmary Challenge magazine.