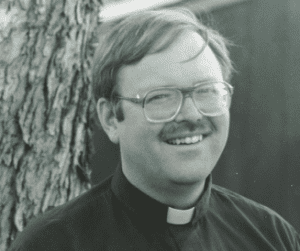 Bill Bergan can trace his awareness to Glenmary back to his childhood days. A kid from his Philadelphia neighborhood went off to become a priest. That was Vic Subb, now Father Vic.

He was a classmate of young Vic’s brother, Joe. Bill knew that Vic had joined Glenmary, that he became a priest, and he watched Father Vic’s career over the years, with admiration.

Bill so admires Glenmary’s mission that he will help support Glenmary both with a gift now and with a larger planned-giving donation when he dies.

“One of the things I like about Glenmary is their really focused mission,” says this man who spent his career working for the U.S. Navy. “They’re out there in communities where the Catholic population is small to begin with, and they’re building bridges.” He likes that.

Some of his love for Glenmary comes from his own exposure to the Deep South as a child. “When I was visiting with my family in Florida, driving across the rural South,” he recalls, “I knew how suspicious people could be of Catholics.”

Once they stayed overnight in a hotel in Brunswick, Ga., near the Atlantic coast, but not far from Glenmary’s inland missions.

“Everything was fine at the hotel. But when we told them we wanted to attend Mass the next day, and asked where the nearest Catholic church was, there was an abrupt change in how we were treated.”

He saw poverty in the region, driving the local roads those days before the interstate highway was complete.

Now in his sixties, Bill spent the first part of his career working for the Naval Shipyard in Philadelphia, overseeing contract procurement for anything needed on the base. His involvement in aquatics continues; he has managed aquatic programs, trains lifeguards, and coaches for the Special Olympics.

Not long after he ended his years at the shipyard, when he was in his 40s, he began to think of Glenmary.

“Here at my local parish, Queen of Peace [Ardsley, Pa.] we collect things for Father Vic.” Religious items, rosaries, prayer books and the like, he says. “We bundle them and provide them to Father Vic for the people in his local area. People don’t have the spare change to get these things for themselves.”

That’s perhaps most true among the agricultural migrant workers in the area. “They’re far from their families back home. He brings a caring presence to them.”

Bill has some words of advice for others in his situation: “I realized my family was doing reasonably well,” he says, and he himself lives modestly (“Practical things always suited me”). “None of my family is struggling, so they won’t need my assets at the time of my death. So I want to give a larger, meaningful gift to the organizations that I’ve supported in my lifetime.

“Everybody who has done well in life financially should really consider some form of giving back,” he insists. “I think we really have a moral obligation to do something for the less fortunate.”

Thankfully Bill is entrusting some of his resources to Glenmary to do just that.