O Emmanuel, our King and Giver of Law: come to save us, Lord our God! 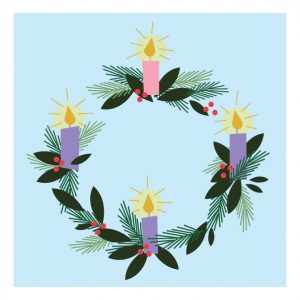 When the time arrived for Elizabeth to have her child she gave birth to a son. Her neighbors and relatives heard that the Lord had  shown his great mercy toward her, and they rejoiced with her.

When they came on the eighth day to circumcise the child, they were going to call him Zechariah after his father, but his mother said in reply, “No. He will be called John.”

But they answered her, “There is no one among your relatives who has this name.” So they made signs, asking his father what he wished him to be called. He asked for a tablet and wrote, “John is his name,” and all were amazed.

Immediately his mouth was opened, his tongue freed, and he spoke, blessing God….

Reflection: Today’s Gospel is Part II of the Zechariah story. Yes, of course, it is the birth story of John the Baptist, but the Gospel of Luke also gives each of us a stand-in. In a sense, Zechariah is you and me! Are we sometimes impetuous? Remember, that’s how Zechariah lost his speech in the first place, questioning the Angel of the Lord a little too closely.

Now he has had many months to think and pray about it—in silence. Now, when he speaks, he affirms that something bigger than him is going on here, that his wife understands something that he has not. Don’t each of us sometimes think we know the answer without listening?

Let us pray: Loving God, in this last full day of Advent, open my eyes, open my ears, open my heart! As I look toward whatever this pandemic-Christmas might hold, help me to keep my eyes on you, and your faithful love.