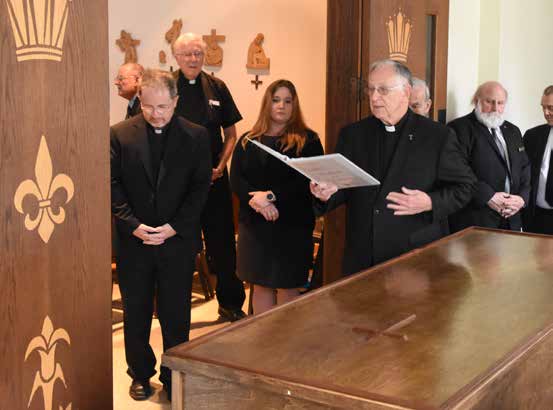 Glenmary Volunteer Director Joe Grosek knew there would be surprises when he helped move the volunteer program to east Tennessee 7 years ago. “I never thought I’d be called to bury somebody because they weren’t able to pay someone to bury them!” he says. But respect for the dead is part of being Catholic. In November, when we pray for those who have gone before us, and reflect on our own mortality, here is one of a thousand stories of how Glenmary responded in faith. This one was in Grainger County.

It’s the only time he’s been called on literally to bury someone, says Joe. But Glenmary Brother Joe Steen, a carpenter, fashions caskets from time to time. And he made the casket for the family that Joe Grosek speaks of. “It was a brother and sister, who lived in a house that was in shambles,” Brother Joe recalls. “The sister died, and the brother needed help.” The local Glenmarians met the need.

“I made the coffin, Father Steve Pawelk, of course, led the service, with another preacher, volunteers from our volunteer program dug the grave, and Brother Craig Digmann sang a song.” The grave-digging volunteers, that week from New York’s Fordham University, were led by Joe Grosek. They also brought flowers to the grave.

“The coffin was a simple pine box,” recalls Brother Joe. “I went to Home Depot [a long drive] to get the lumber. I only had a day and a half to make it, so it was pretty basic.”

“This means the world to me,” said Terry, brother of the deceased. “I was born on this mountain, and I could not find one person to help me.” That kind of helping hand, reaching out to neighbors in need, is what Glenmary is all about. It’s what the Church is all about.

The whole event was a great moment for the college-student volunteers to reflect on that presence we, the Church, have in society. Burying the dead is one of the Corporal Acts of Mercy. Those corporal (bodily, earthly) acts bear witness to the meaning of our faith. They are an act of evangelization anywhere, but they especially send a signal to communities where the Catholic Church has had no formal presence. They bear witness.

Those connections drive the mission of the Church. The connections we maintain as we pray for those who have gone before us are part of that.