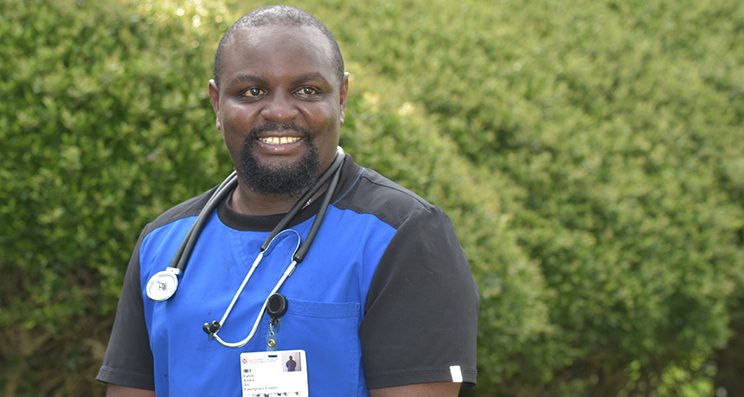 Glenmary’s Levis Kuwa is a Catholic missionary brother, and a nurse.

It’s 6 p.m. in Blakely, Georgia, and Glenmary Brother Levis Kuwa is heading quickly up Route 28 to the emergency room. He’s not injured or anything. Brother Levis is a nurse at Southwest Georgia Regional Medical Center, night shift.

Brother Levis will tend to all manner of problems as the night goes on. As the cotton and sorghum fields whiz by, he prays that tonight will be slow. Thirty miles later, he arrives in Cuthbert, in adjoining Randolph County, parks his car in the small hospital lot, crosses a quiet street to the one-story hospital, and punches in. His coworkers eagerly greet him—he is a welcome member of this emergency room staff. 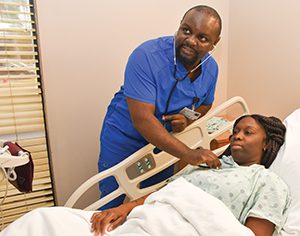 Brother Levis has a variety of duties during nights in the ER, including monitoring the condition of patients, as illustrated here.

“Where are you from?” his patients, hearing his Kenyan accent, sometimes ask. “That’s a very good conversation starter!” he says with a laugh. “The first thing I tell them is that I took the wrong exit and kept going!” Brother Levis is the kind of nurse you’d want to have: He has a sense of humor, and underneath that, a joyful take on life. And he knows what he’s doing.

“I grew up in hospital quarters,” says Brother Levis of his boyhood home, in Nairobi, Kenya. “We used to live in government houses inside a big hospital, sort of like a hospital village.”

That’s a bit like the historic Public Health Service hospitals in the United States. Everyone on the compound was in some way part of the hospital family of doctors, nurses and so on. “I was comfortable enough around hospitals since I was a little kid, but I never really wanted to go into healthcare. I didn’t want to follow the family business!”

That changed for him when he met Glenmary. He had studied with the Augustinians back home but stumbled into Glenmary through internet research. After meeting Glenmary’s vocation director Father Steve Pawelk, who had come to Nairobi, he heard his calling. That was back in 2005, when Levis was 22. Before coming on board, Father Steve asked Levis to do ministry in Kenya for a year, as a kind of vocational test.

“He gave me a choice of whatever ministry I would like to do,” Levis recalls. Like St. Francis, to whom “what had seemed bitter became sweet,” Brother Levis turned to what he had been running from. “I requested the Kenya National Hospital to let me do a ministry there for one year.”

His earliest start was pastoral ministry at the hospital. “I visited the patients, I prayed with them. I listened to their problems or whatever may be going on with their families and where the Church might be able to help. I actually enjoyed that,” he says with his winning smile, then admits, “I loved that.”

When he came to the United States, Brother Levis was surprised to see good healthcare unevenly available.

“I discovered there were a lot of people suffering with minor ailments who are afraid to go to the hospital because they could not afford it, or did not have insurance. There is a gap there. So I requested of Glenmary whether I could pursue that.” 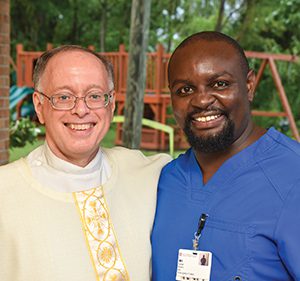 Father Mike Kerin, left, and Brother Levis stop for a photo after Mass at Holy Family church in Blakely, Ga.

That is the way his calling became his profession. Already he had two degrees in philosophy, and a professional certification in banking. He left those behind, professionally at least, and enrolled in nursing school at the University of Cincinnati in 2011. Now he’s in a busy ministry among the underserved in Early and Randolph Counties, with two other Glenmarians, Brother Jason Muhlenkamp (social worker) and Father Mike Kerin (pastor of two mission parishes). These counties tucked into southwest Georgia, close to the Alabama state line, once were home to plantations and slavery, and virulent racism. Agriculture is still king. Today 25% of area families live in poverty, including almost 49% of children. And having very few Catholics makes Church-based ministry challenging.

Brother Levis is not the first nurse in Glenmary (see page 13). His choice follows an inner prayer: “Where would you like me to work? What am I suited for? What do you make me? You encounter someone who’s really sick and suffering and you feel, I wish I could help,” he says. God gave Levis the compassion, sharp intellect, and fearlessness, to help. He’s been at the medical center, in the emergency room, for about a year and a half.

Brother Levis can talk for a long time about life in the emergency room. No two days are the same. In this rural hospital, sometimes things in the ER move fast; sometimes not. “We can only handle six people at the same time. Working in the emergency room means that you have to be able to anticipate. You do not know who’s walking through the door. The ambulance may bring in car accidents, gunshot wounds, or someone experiencing a cardiac arrest.”

An initial assessment can be as critical as, “Are they breathing?” he says, or as non-urgent as “a sore throat that started 30 minutes ago!” His hospital is the only resource in the area, so they don’t turn anyone away, including the non-insured.

On a slow night, there might be only one patient in the ER. That’s when Brother Levis can shine as a religious Brother. “I get to sit down with them and ask them about their life and get personal.” 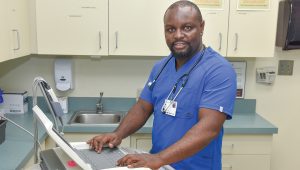 Brother Levis’ job at the ER requires a combination of both pastoral and technical skills.

There are less pleasant times when his pastoral training is needed, too. He recalls one emergency that led to death. “We did CPR, followed the lifesaving protocols,” he says, but it was too late. The family was in the waiting room, and “some were hysterical,” he says. “At this point, everyone—the doctor, the other nurses, some of the other workers—looked at me and said, ‘You’re the closest thing we have to a chaplain.’” That’s the kind of acceptance he had hoped for when he came to south Georgia.

His work won’t end in the emergency room at Cuthbert. “I dream of opening a free clinic to help the poor, the marginalized and forgotten people.”

There people won’t miss medical treatment for fear of cost. He’ll continue his training, and become a nurse practitioner, who can do just that. Maybe, he hopes, a few other people will join him.

Story and photos by John Feister