“Go where obedience has destined you.” 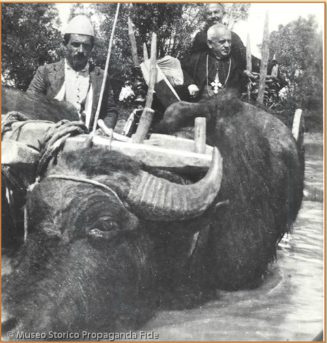 He could be considered the patron of modern mission, a theme Pope Francis promotes again and again. Blessed Paolo Manna left his Italian home to be a missioner in modern-day Myanmar, in southeast Asia. He spent 10 years there, but fell ill with tuberculosis and had to return home several times, then for good.

In Italy he became a leader of missioners worldwide, founding the Pontifical Missionary Union, an overseas mission seminary, and an order of missionary sisters.

His biggest contribution was to help shape a modern understanding of mission through his prolific work with the media of his day. He in fact was an influence on Pope Benedict XV, who issued the landmark teaching document on mission Maximum Illud, which moved the Church away from colonialism toward cultural sensitivity.

Bl. Paolo published a family magazine (“The Catholic Missions”), a children’s magazine, a newspaper, and authored a number of books and booklets. His thinking and writings laid the groundwork for Ad Gentes, the teaching of Vatican II that informs all Catholic missionary work today. If he were alive now he would no doubt be cranking out apps, Twitter feeds, podcasts—he had a passion for mission education.

Pope St. John Paul II said of him, “Fr. Manna’s greatest legacy is the example he left behind: he was driven by an overwhelming passion for the missions that sickness, suffering and setbacks could never diminish.”

Prayer/reflection:
Blessed Paolo, you showed an unquenchable desire to spread the Good News, and to help the Church worldwide to think about our missionary call. Pray that we, too, will have fervor for missions, for bringing God’s word to people in our mission fields, especially to those most in need. We ask this through Christ, our Lord. Amen.