“I want to become better and do good.” 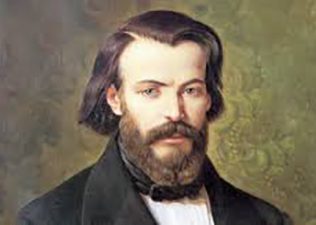 What a conflict it must have been to go into the streets, into the poorest neighborhoods in Paris, France, and tend to the poor during a cholera epidemic! Surely that’s a great challenge for anyone serving the sick during today’s coronavirus pandemic. Yet that’s what Blessed Frédéric Ozanam felt called to do. He was a college student at the time, and went on to be professor, a writer, journalist and lifelong servant of the poor.

His wife, Amelie, was a philanthropist in her own right and supported his calling. They were happily married, and had one daughter. But their life together was short lived—he died of tuberculosis at age 40. During his short life he and his college-student friends, with the help of Sister Rosalie Rendu, DC,  founded the St. Vincent de Paul Society. It grew into a worldwide movement of Catholic charity today, with 800,000 members, serving from Catholic parishes in 150 countries.

He was in a debate club at college when it all started, defending the Catholic Church against a group who rejected the Church as irrelevant to the poor. They challenged him and his friends to show them different. At the suggestion of a professor, Frédéric headed for Mouffetard district, a ghetto, where Sister Rosalie ministered. She taught him how to be present to the poor.  His first act of charity was simple enough. He took a bundle of firewood to a widow whose husband had died of cholera. He continued these acts of service, and as he and Sister Rosalie founded St. Vincent de Paul conferences around Paris to deal with the epidemic, he oversaw the organization.

His writings at Sorbonne University are seen today as foundational to much of the social-justice teaching of the Church since his time.