Home / News and Notes / An Oath for Life

An Oath for Life 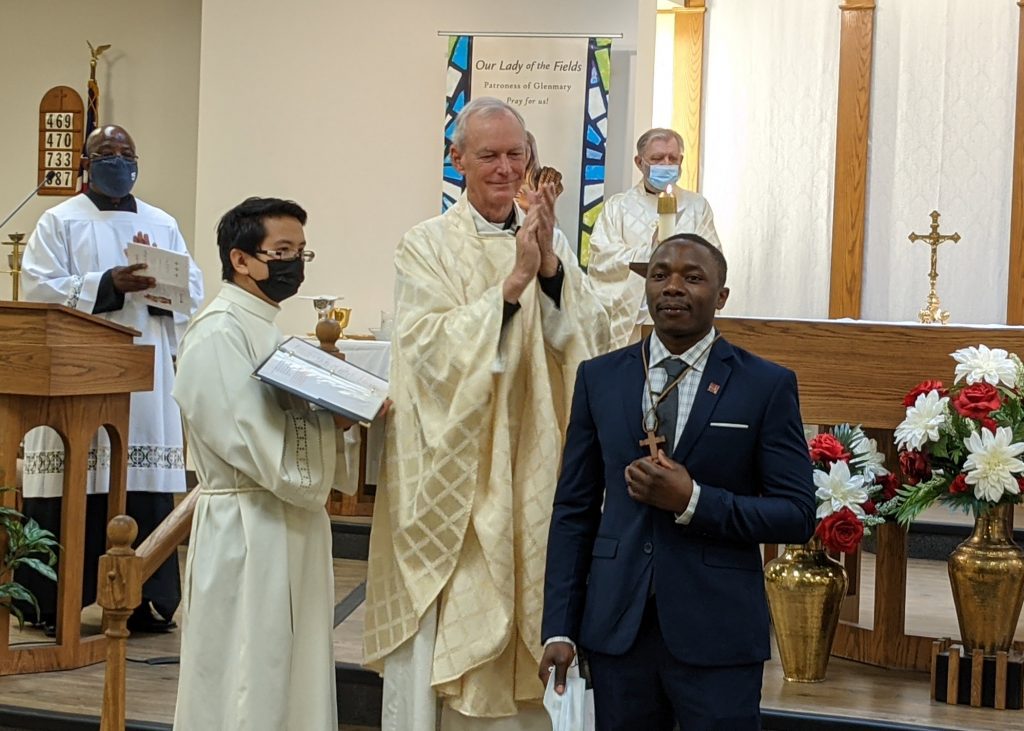 Brother Josiah Kimani receives a round of applause at his Final Oath liturgy.
He is training to become a nurse, heading into an area where healthcare is desperately needed.

Early in May, two students renewed their one-year oaths to Glenmary: Erick Orandi and Willy Kyagulanyi. Another student, Josiah Kimani, has completed his formation and just weeks ago, on May 29, came to the altar to make his final, lifelong oath to his Glenmary brothers. Now he is Brother Josiah. He first came to Glenmary five years ago, a Kenyan who had been working as missioner in the Philippines.

“It’s been a long journey, but it seems like only yesterday,” says Brother Josiah. “The idea of going to the rural places in America struck me [back then] because I never thought that in America, there were rural places where people don’t have Catholic churches.” So he came, he saw, and the chemistry was right. “I’m going to go with it,” he decided, and never turned back.

He went through novitiate year to pray, and to learn the foundations of Glenmary’s mission. He studied at Glenmary’s formation house at St. Meinrad, and spent his summers in the home missions. In one Tennessee mission, he recalls, “I did homebound ministry, visiting the sick, then visiting the nursing home. I went to the senior center, as well—then Bible study, and dancing class as well!” It was an immersion into the life of a Glenmarian.

Unlike some candidates, Brother Josiah knew at the outset that he was called to religious brotherhood rather than priesthood. He had learned that while working in missions overseas. He came to Glenmary because, unlike some communities, Glenmarians have a vital understanding of and commitment to religious brotherhood. (Glenmary Brother Jack Henn, for example, was once national president of the Religious Brothers Conference.)

Along the way he discerned that he would be a nurse. He particularly is attracted to community nursing. “I feel like you develop a rapport with patients that is not there in the hospital. There you might see a patient for some time, then they’re discharged and you never see them again. But once you do home health, the patients become part of your family.” That is especially true in small town ministry.

When asked where he sees himself five years from now, Brother Josiah talks about community nursing. That, of course, is after he completes nursing school and is licensed—he’s started his studies already. And he sees other possibilities down the road with Glenmary Brother Levis Kuwa, a nurse who is preparing to study as a Nurse Practitioner. “Maybe we can have our own clinic, a small health center in the missions…It’s still an idea that’s out there.” It’s a dream of service. That, with God’s help, is the seed for something great to happen.