Home / News and Notes / Adapting: It’s what missioners do

Adapting: It’s what missioners do 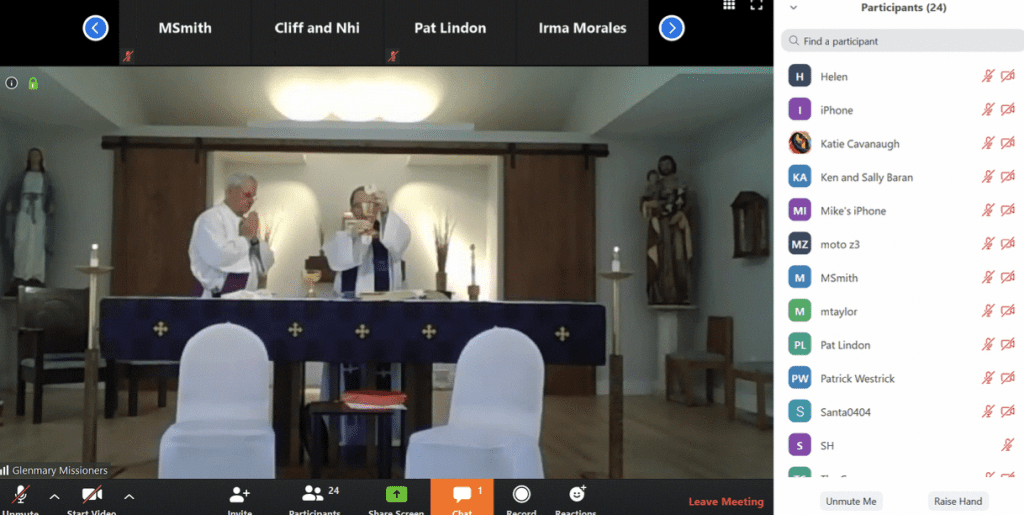 In the face of Mass cancellations caused by the coronavirus pandemic, Glenmary Father Neil Pezzulo celebrates Mass for a streaming audience with assistance from Deacon Larry Rossini at St. Teresa of Kolkata in Maynardville, Tenn.

When you’re a Glenmary missioner, you learn to improvise and to adapt to the local situation.  Sometimes you meet your faith community for Mass in a house, in a storefront or in a trailer.

When all late March Masses were canceled in the Diocese of Knoxville to stem the spread of the coronavirus, Glenmary Father Neil Pezzulo knew that he had to find a new way to reach his eastern Tennessee faith communities of St. Teresa of Kolkata in Union County and St. John Paul II in Grainger County. 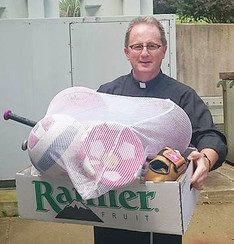 According to Father Neil, “What it means to be a Glenmarian is to take seriously the words of our founder, Father William Howard Bishop, when he spoke about reaching out to the lost and the forgotten.”  Soon plans were underway to host an online Mass from St. Teresa.

Father Neil did not really know what to expect with a streamed Mass.  When he booted up the Zoom software more than a half-hour before Sunday’s 9 a.m. Mass, he exclaimed, “Oh, we have three people here already!”

Over the next half hour, more and more people signed on.  None of the parishioners may have attended an online Mass before, but that did not stop them.  Soon, somebody said, “We’re going to start the rosary.”  The faith community sprang to life.

Some parts of the Mass took on added meaning in a time of uncertainty.  The psalm response, “The Lord is my shepherd; there is nothing I shall want” seemed particularly appropriate for people facing the unknown challenges of both a pandemic and the resulting economic chaos.

At the kiss of peace, Katie Cavanaugh wrote in the Zoom chat box, “Peace.”  Pat Lindon responded, “Peace be with you.”  Without coaching, others turned on the computers’ cameras and waved or opened their mics and spoke greetings of peace.  It was all spontaneous, the acts of a loving community.

Father Neil summed up the situation, “I would have never thought that we would be dealing with a pandemic but this is the situation and as a missionary I feel the need to adapt to the situation I find myself in and find ways to reach out based on the local situation.”

It’s no surprise that a Glenmary missioner would quickly adapt to a rapidly changing situation to meet the needs of Catholics near and far.  After all, it’s what Glenmarians have been doing since 1939.

As Father Neil puts it, “One voice, one heart, one message, one God.”

Glenmary missioners across Appalachia and rural parts of the South are adapting and devising creative ways to continue serving the people of God during the pandemic. Check back frequently at Glenmary.org for opportunities to learn more.