Home / News and Notes / A Look from the Outside

A Look from the Outside 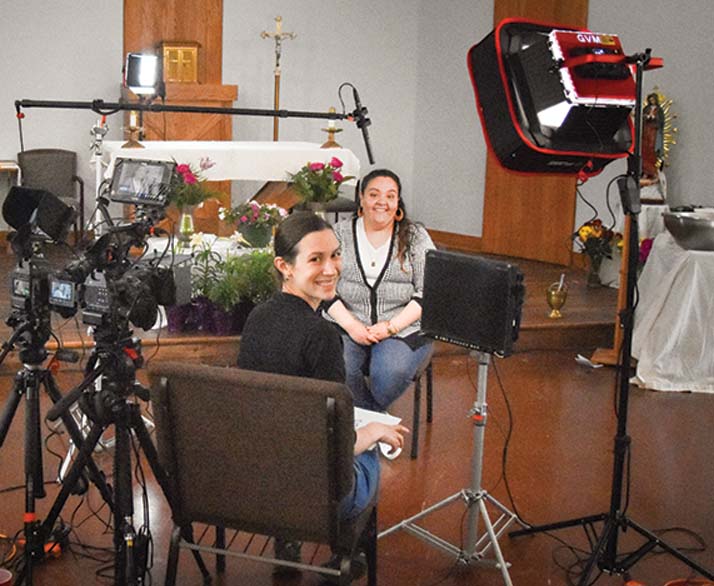 “Handpicked and equipped by God, one determined priest established the Glenmary Home Missioners….” So begins the first in a series of new videos about Glenmary. Earlier this year, we set out to create videos about Father. William Howard Bishop (our founder) and about Glenmary today. There will be eight five-minute videos: four in Spanish and four in English. That project is underway, with the first video completed, freely accessible to anyone via YouTube.Search “Father Bishop, Glenmary founder” on YouTube to find it.

Some of our communications team took a video crew to missions in East Tennessee and in Eastern North Carolina to conduct interviews that will be woven together to make the other videos. The video professionals, from Indiana-based Thing in a Pot Productions were new to Glenmary country. So after the trips, we turned the tables for a moment, interviewing producer Katie Rutter about what surprised her in the home missions.

What impressed her most? “The whole idea of evangelization,” Katie says. “As a Catholic I’ve often felt guilty and a little frustrated because I don’t feel our Church is doing a good job of it. I had pictured in my mind what evangelization might look like, and that’s exactly what you are doing at Glenmary. It was exciting to see.”

One thing Katie and her crew noticed along the way is how down-to-earth Glenmary is. She heard again and again about a “Glenmary ideal”—gathering the people where they are at, by simple means. “Father Dan [Dorsey] describes in one of the interviews that the Catholics were gathering in a Moose Lodge!” That kind of thing just doesn’t happen in Catholic-majority areas like where Katie is from. “We don’t need these huge edifices to be good Catholics,” she says. “These come later. It’s neat to see where it starts, in these small communities.” She calls Glenmary “humble, in the best of ways.” Katie’s talking about how Glenmary can make a lot out of a little, how things don’t have to be perfect to be the right things for right now.

One example of Glenmary’s approach she saw in  her encounter with Father Neil Pezzulo, pastor in Union and Grainger Counties, in East Tennessee. He was a master of hospitality for all involved. “He stands out for me because he seems a quintessential Glenmarian, just making things happen. I’m going to guess that everyone, in his own way, is very similar. He’s very down to earth, willing to get his hands dirty and do what needs to happen in order to take care of his people. That Glenmary approach, that ideal,  is very cool.”

She also was taken by the breadth of ethnic groups in missions—Hispanic, Filipino, Anglo immigrants as well as longtime residents. That goes for missioners, too. “It used to be that Anglo or European countries were going out to be missionaries. Now many Americans are losing our faith, and people from traditionally missionary territories are coming to help us out. That’s so cool about Catholicism, right?”

Take a look at the first video in this four-part series.