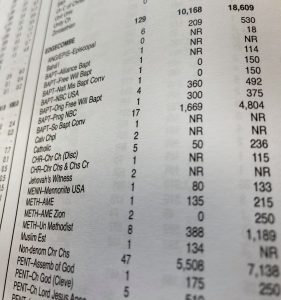 The U.S. Religion Census is published every 10 years.

Since Glenmary Founder Father William Howard Bishop published his first map of “No Priest-Land, USA” in the 1930s, collecting data on where Catholics live and worship has been important to Glenmary’s work.

Glenmary continues that mission today by working with the Religious Congregations and Membership study (RCMS), which publishes the U.S. Religion Census every 10 years.

“The data from the RCMS is important to Glenmary’s mission,” said Lucy Putnam, coordinator of the Glenmary Research Center. “It helps us understand where Catholics are in the missions and to better understand the other Christian groups or religions living alongside them.”

Work is underway in gathering data for the seventh installment of the RCMS with an eye toward publication in the Spring of 2022. Glenmary’s role in data collection is finding the Catholic “count,” or number of Catholics in the U.S. across all Latin and Eastern Rite churches. For 2020 Glenmary has partnered with Georgetown University’s Center for Applied Research in the Apostolate (CARA). Leading the efforts on this end is Dr. Cliff Grammich. 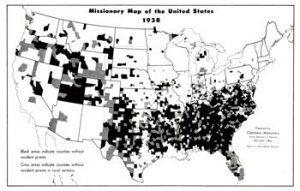 The overall count is led by the Association of Statisticians of American Religious Bodies and includes all religious bodies in the U.S. This census began as a count of Christian denominations, but over the years added other religions: Jewish and Islam, Hindus and Buddhist, etc. The project is largely funded by a grant from the Lilly Endowment, Inc.

Glenmary uses the Catholic data from the RCMS to research potential areas to set up new missions, frequently choosing areas where Catholics make up less than one percent of the total population.

Catholic data from the 2010 RCMS is available here.